Posted on March 13, 2010 by Michael Wigle
My wife bought me a shirt from Thinkgeek.com that says "I Void Warranties" for Christmas. I enjoy this shirt and think I fit the bill fairly well. Sometimes it’s hard to know if what you are doing will really void the warranty of the device. Sometimes it’s a bit more obvious.

This week the Fantom Drives MDN1000 NAS at work, affectionately referred to as Frankie, died on me. It had the only copy of original source code for a software app I maintain for the State and a curriculum a co-worker and I had been working on. When I called the manufacturer I was told they would repair it (for a fee, warranty was long past) but wouldn’t guarantee not to wipe the drives. Well, that wasn’t acceptable so I called a data recovery company and they quoted $400 – $2400 dollars. Well, that didn’t sound so good either. So, I tried to open the thing myself and couldn’t figure out how to get it open. I unscrewed all the screws I saw but nothing budged. So, I called back and the tech support folks called my attention to a tag on the bottom that read "Warranty Void If This Seal Is Broken".

I thanked the tech support folks and hung up. Then proceeded to get photo evidence that I do, most certainly, void warranties. Here is me peeling back the sticker. 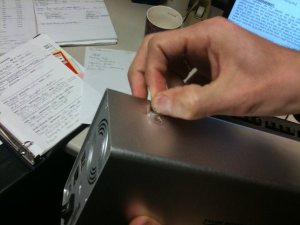 Finally, the entire sticker was removed. This revealed the two screws that were, in fact, holding the darn thing together. 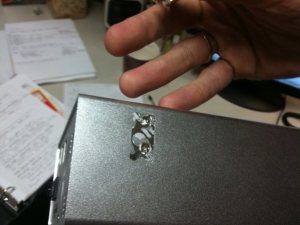 With that, I was able to remove both of the internal 500GB SATA drives. I attached the first one to my laptop using a SATA to USB converter device that Aleah got me for Christmas. Unfortunately, doing so released the "magic smoke" that keeps all electronics working. Simultaneously, I received warnings of a power surge over the USB port. Not a good sign. So, it was time to try the second drive (Yay for RAID 1 arrays!). This one mounted quite nicely and showed me the OS of the device, but no data. It wasn’t until a second attempt the next day that I thought to mount /dev/sdb2 instead of /dev/sdb1 in order to find the partition with the actual data. Thankfully, it was all there!

So, the moral of this story is that I void warranties but I get the job done!

I am a servant of Christ who is married and has two children and three grandchildren. For employment, I am the IT Manager and the Cincinnati Association for the Blind and Visually Impaired. I also have a wide variety of interests from economics to politics to caving.
View all posts by Michael Wigle →
This entry was posted in Computers and Internet. Bookmark the permalink.